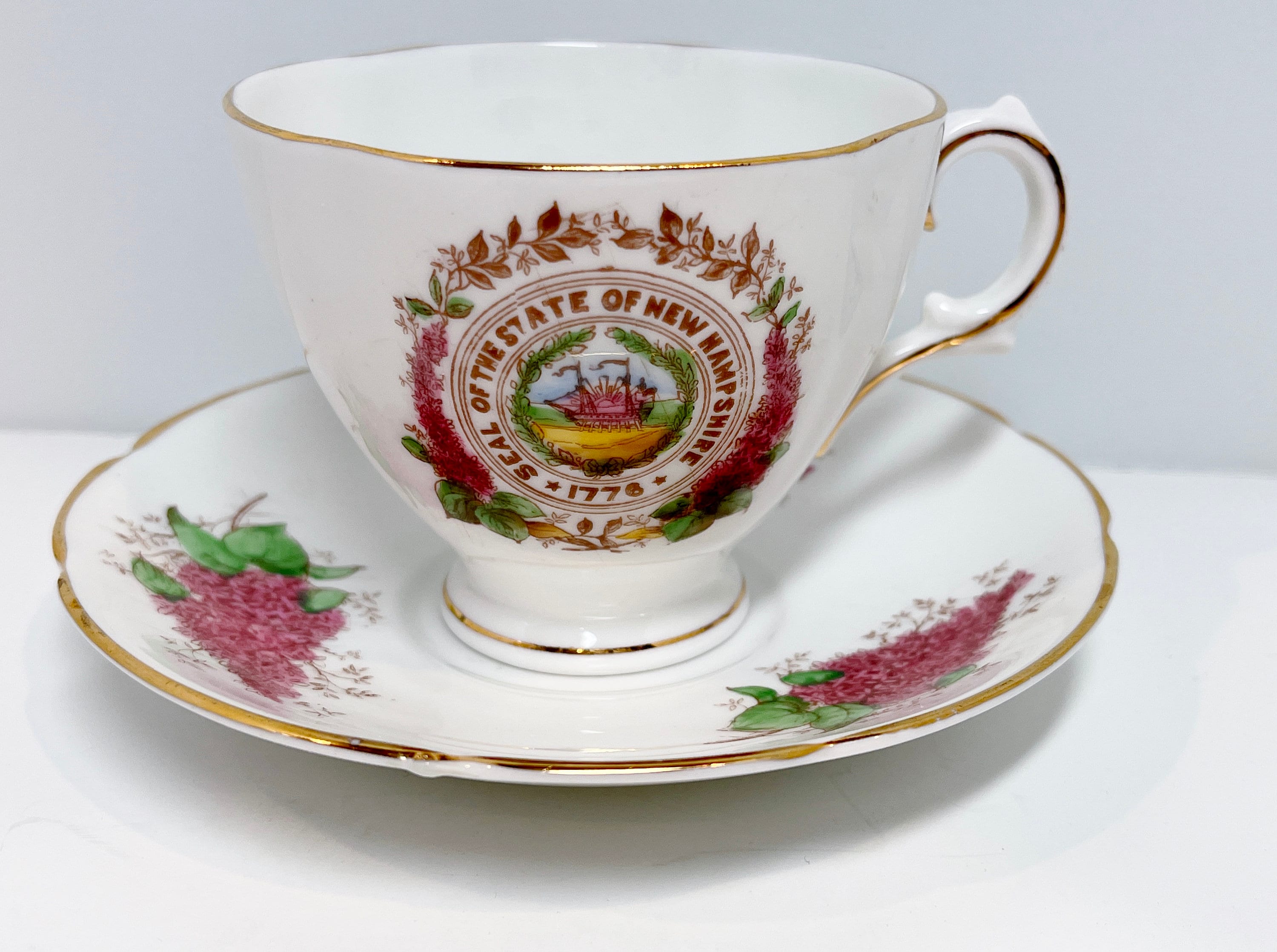 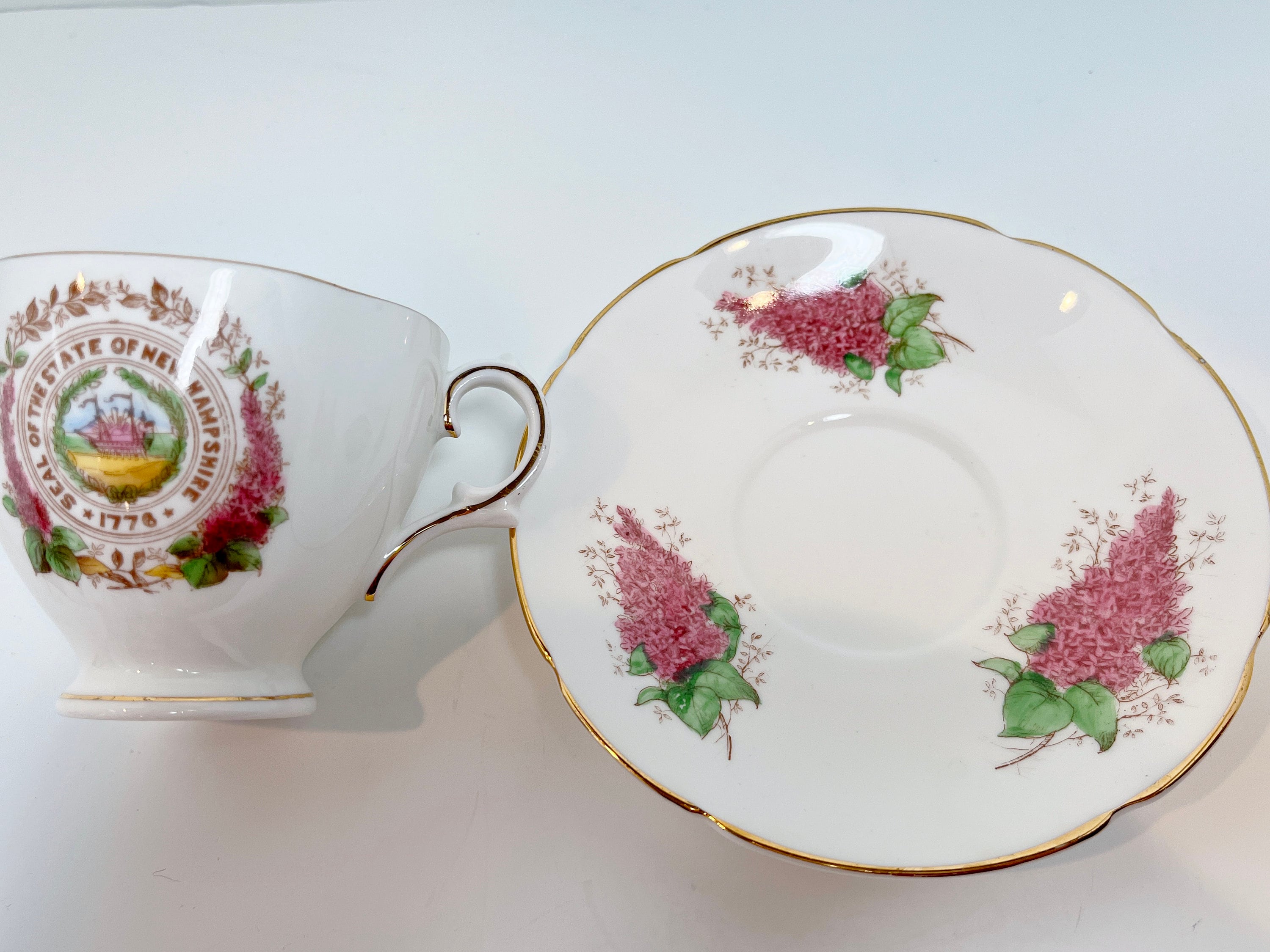 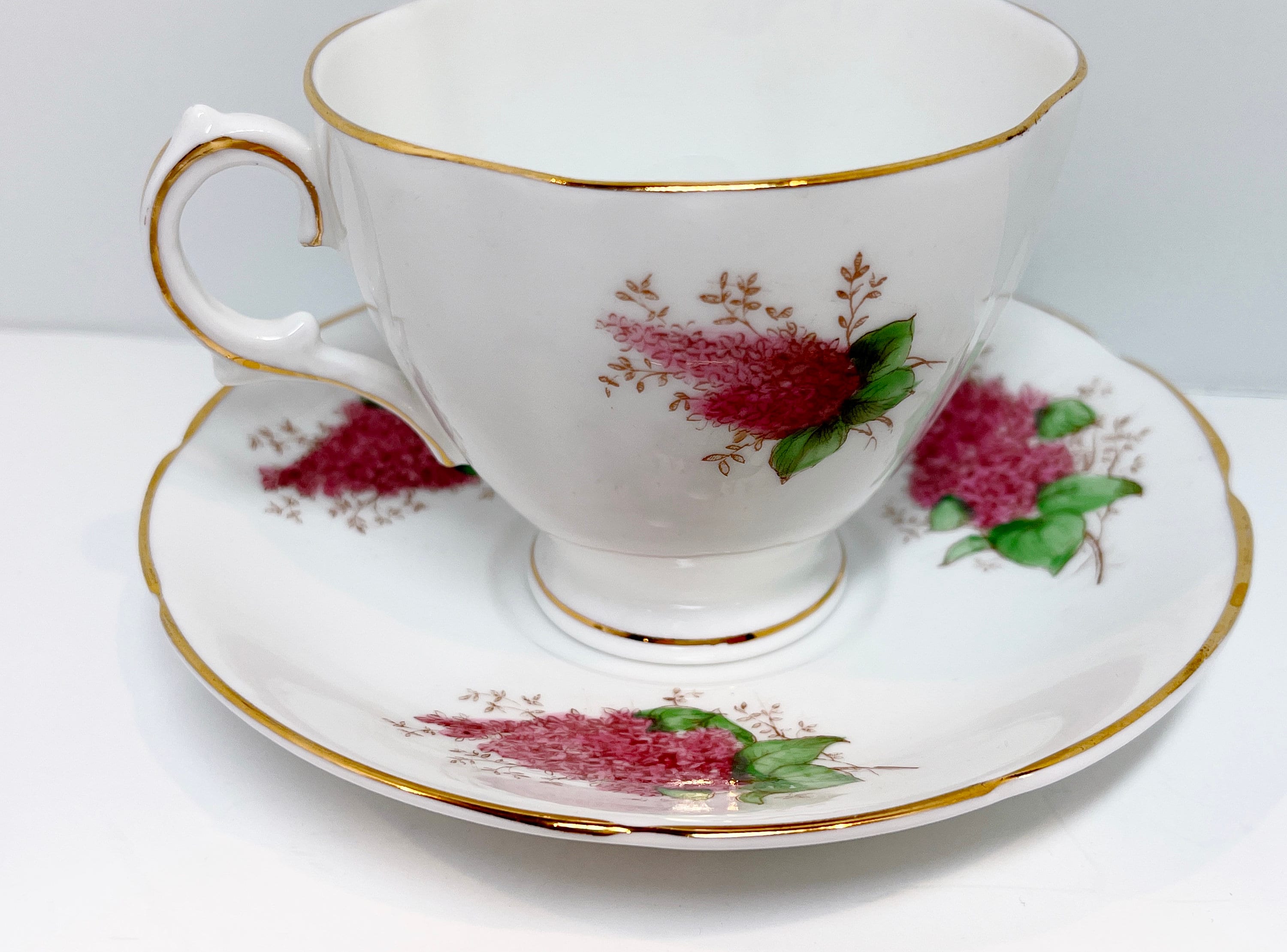 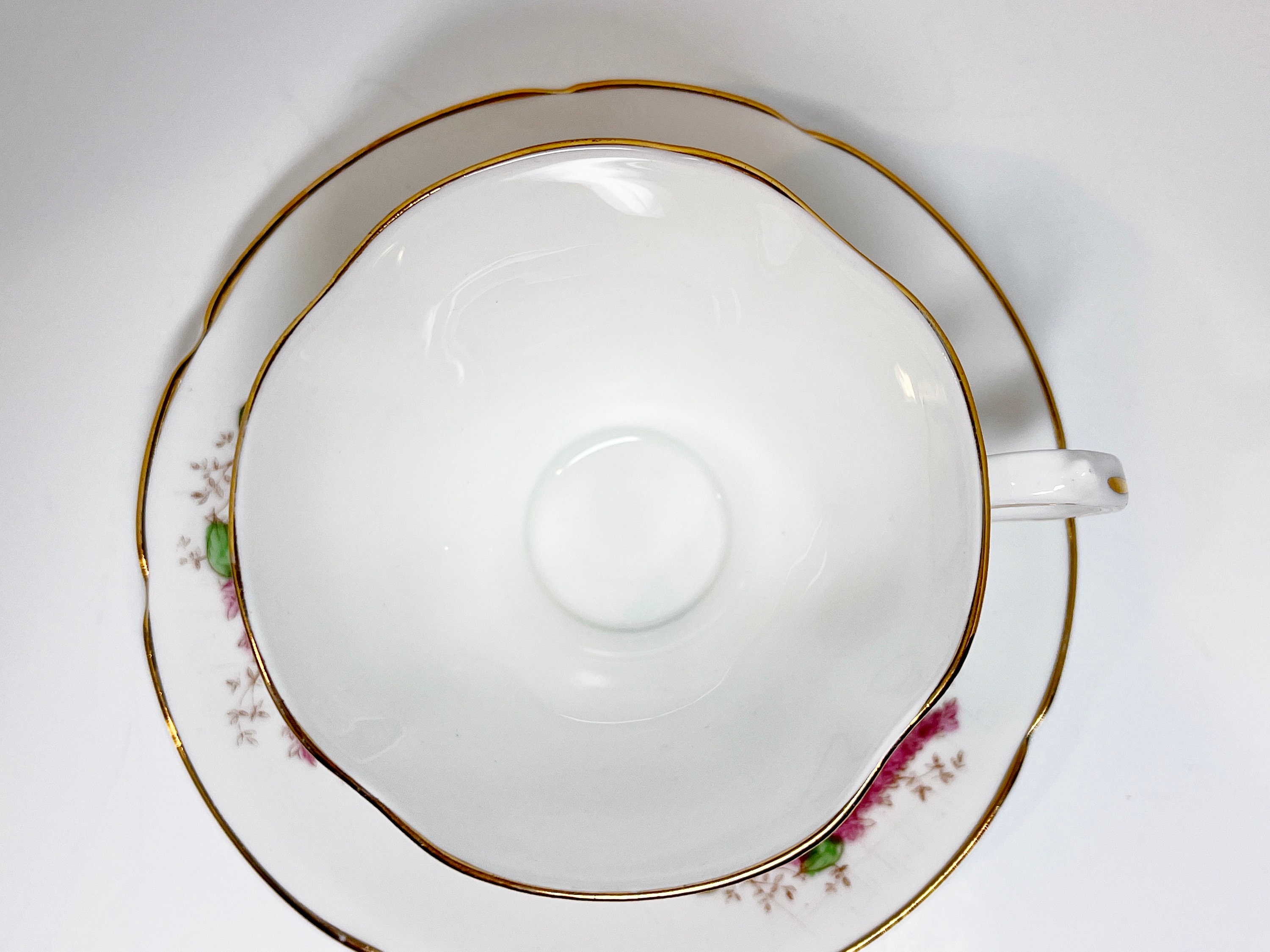 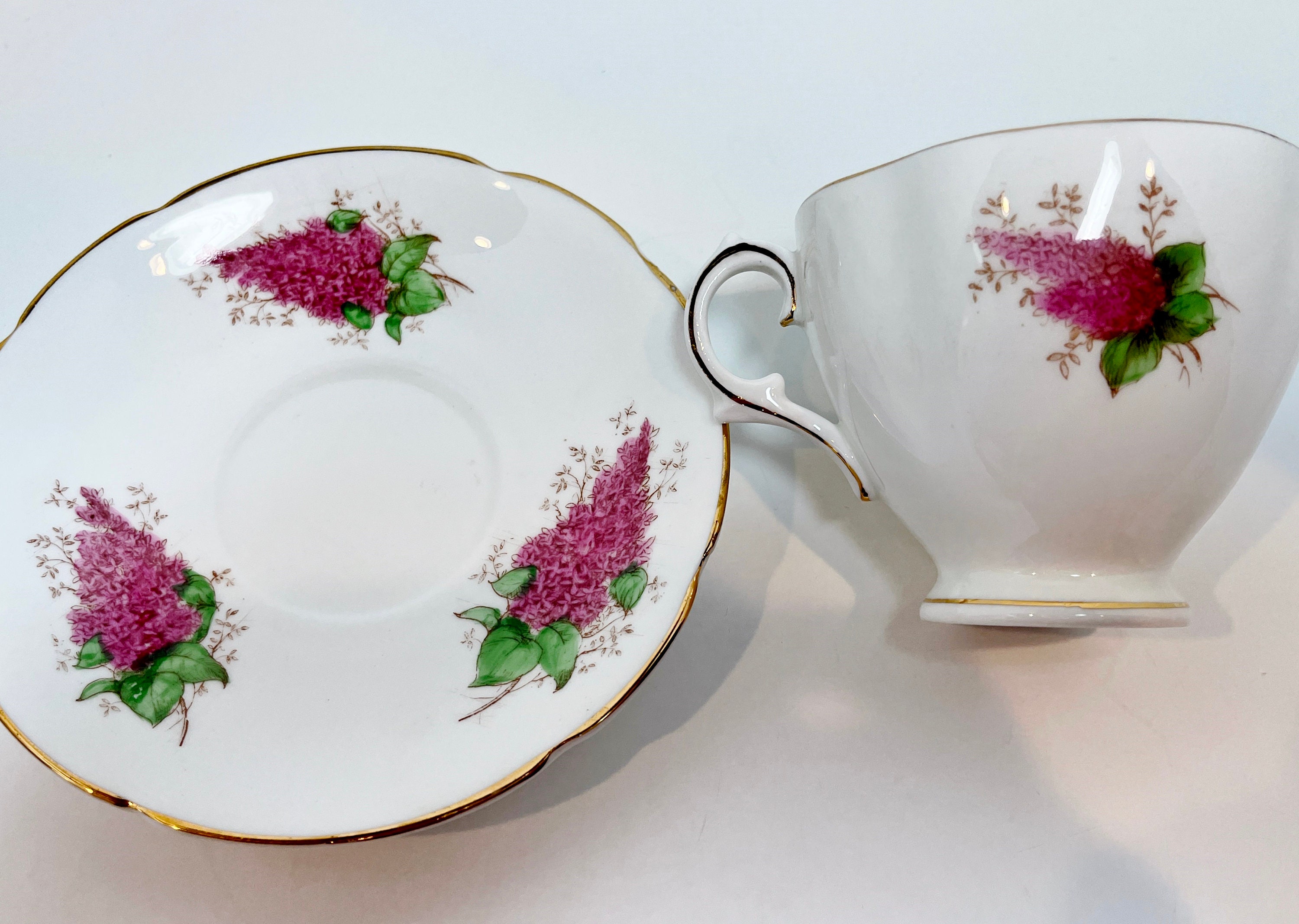 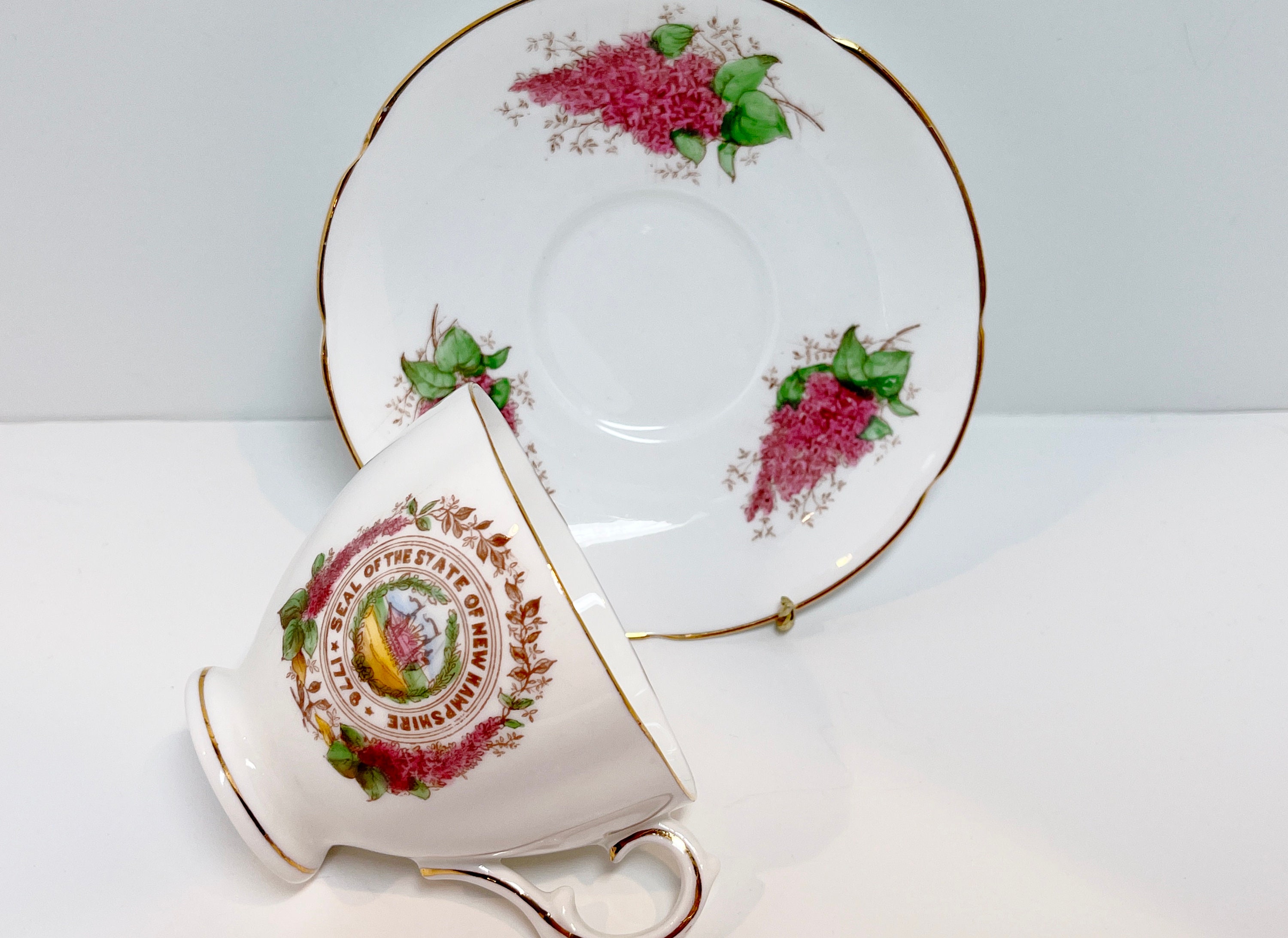 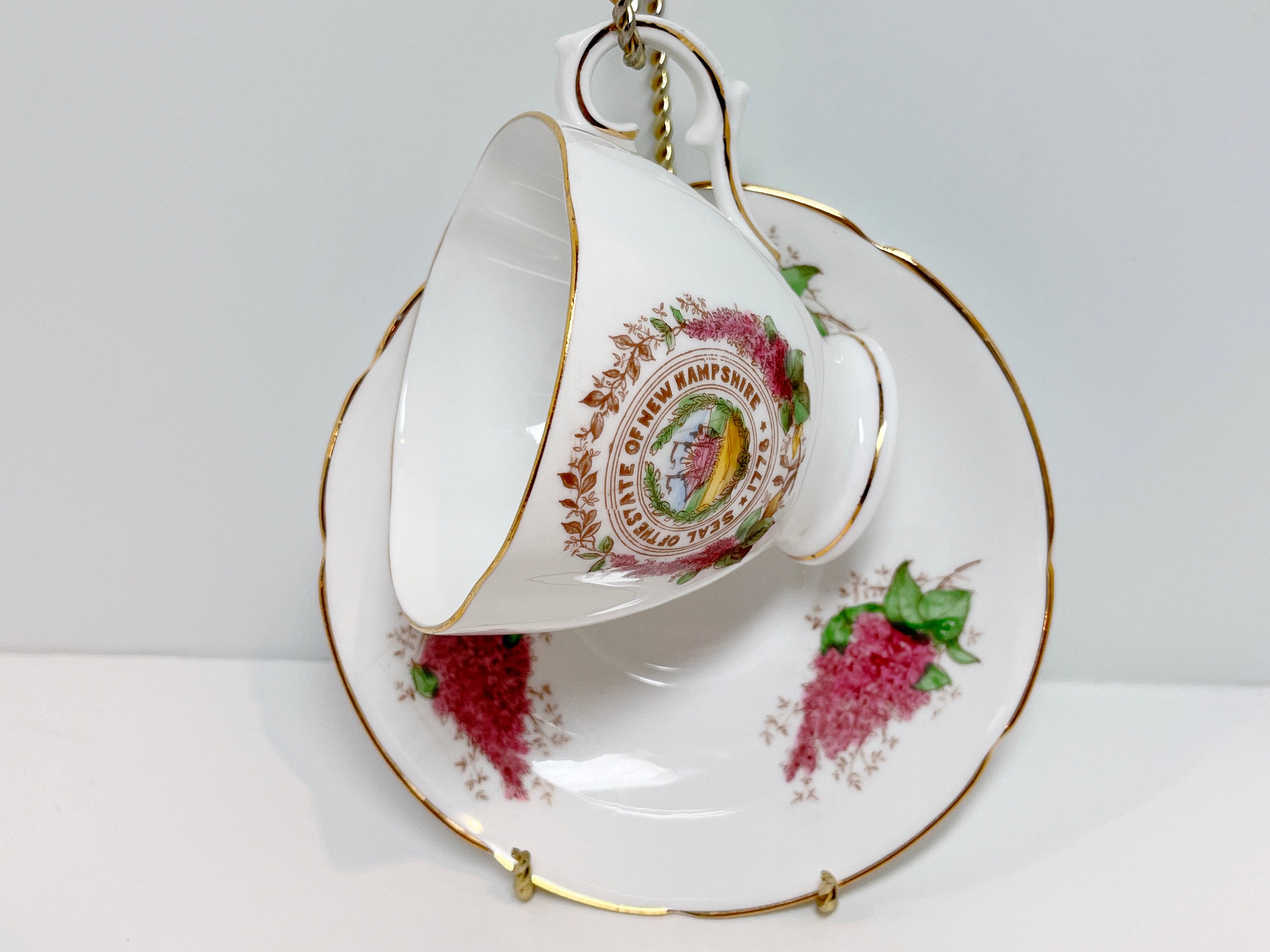 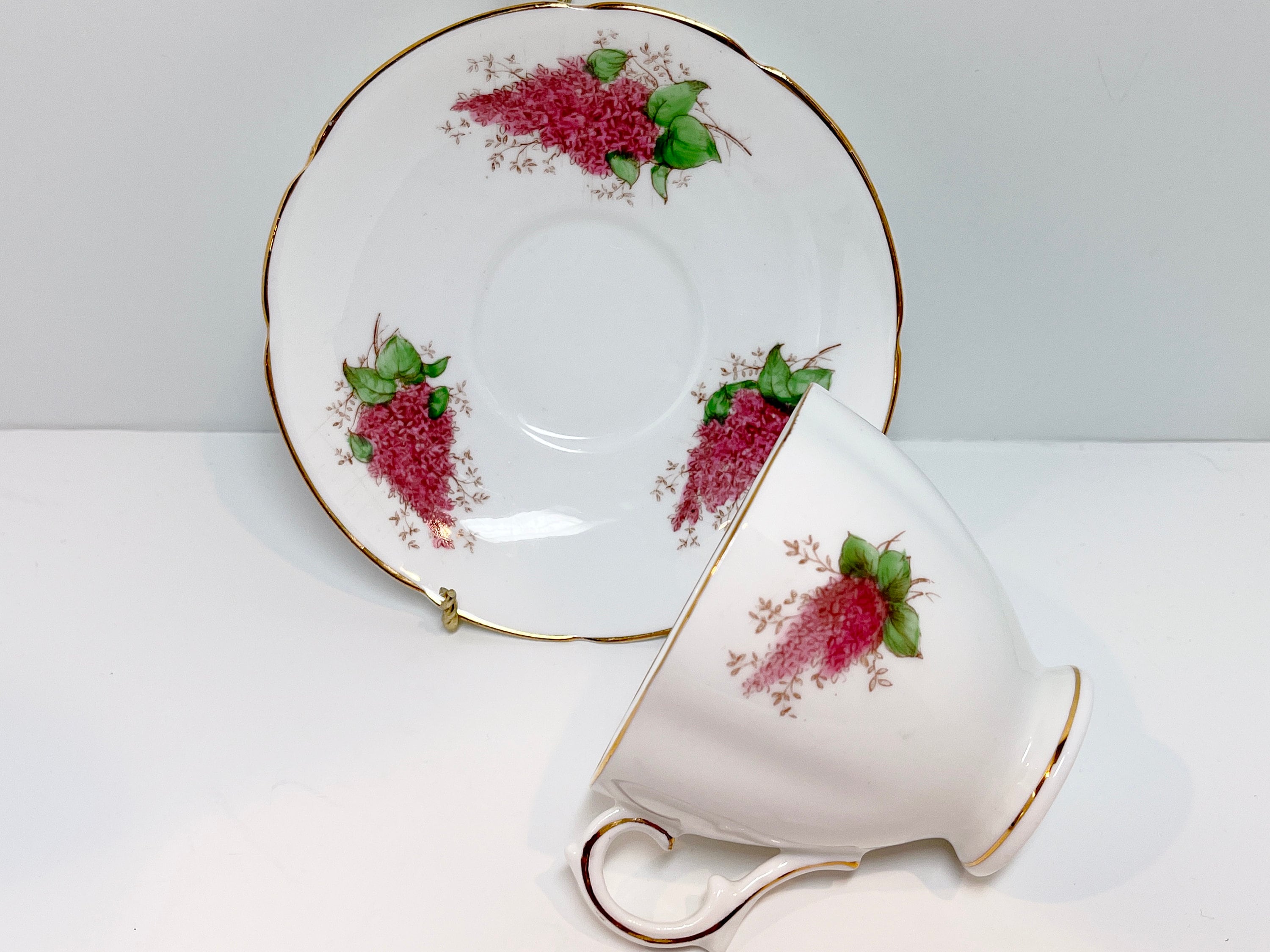 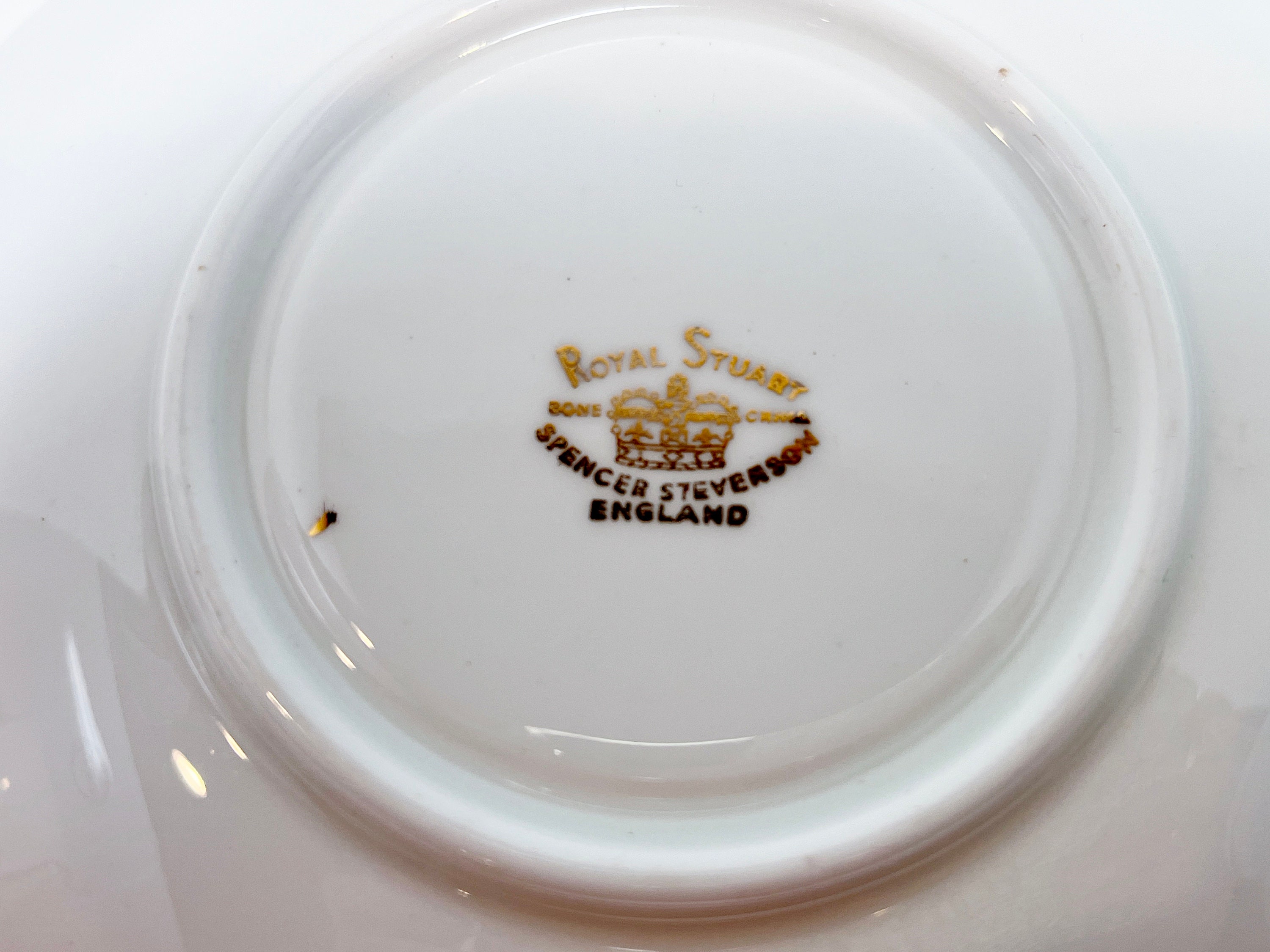 
Enjoy your relaxing beverage in this unique teacup by Royal Stuart Bone China of England. It was actually made by the Spencer Stevenson company which was owned by him and its director. They produced fine china from 1948 to 1960.

Of course, using the Seal of the State of New Hampshire made it unique. Please read on:

The first time lilacs are mentioned in New Hampshire history is in 1750 when Governor Wentworth enlarged his house and the plantings around it. Since the only plant that has ever been planted near the house was a lilac, we believe it was there in 1750. Lilacs were already known in the colonies but few records exist, apparently because the lilac came in as a personal family possession, not part of the agricultural inventory. Therefore, its appearance by the kitchen door was appreciated but never recorded. Although, whenever it came into the state the lilac took root, and, like the hardy settlers who brought it, became a permanent feature in this new world.

The purple lilac became New Hampshire’s official State flower, in a most colorful manner, in the 1919 legislative session. It was opposed by nine other flowers, including the apple blossom, the purple aster, the wood lily, water lily, and goldenrod. The committee’s recommendation was approved by the House on February 20th and sent up to the Senate for concurrence.

The Senate developed considerable purple lilac sentiment and also considered the buttercup. Unable to muster majority support for any flower, the 24 members of the Senate turned to a novel solution. They placed the names of three flowers in a hat, blindfolded Senate Clerk Earle C. Gordon of Canaan, and ordered him to draw a name. The purple lilac, the mayflower and the purple aster went into the lottery, and the latter won the draw.

The Senate reported its unique decision to the House, which clung to the apple blossom, and the impasse was referred to a committee of conference.

The 10-man conference committee soon became stalemated on the flower fuss, and turned to another unique solution. It asked two botanists, Professor Arthur Houston Chivers of Dartmouth and Professor Ormond Butler of the state college to arbitrate the dilemma, and agreed to accept their decision.

The House and Senate concurred with the committee compromise, without further argument, and Governor John H. Bartlett of Portsmouth signed the purple lilac into law on March 28, 1919.

This teacup and saucer is in excellent condition. There are no chips, cracks or crazing. You may purchase with confidence.

Our price also includes free Priority shipping within the US. We do ship worldwide, but there is an extra charge. This also comes with free gift wrapping and free shipping insurance.

Check "It is a gift" and you will be able to write a message. Check gift wrapping ($4) only if you want our higher grade of wrapping.
Out of the US, please add your phone number in message to the seller. We will need it for the forms for the post office.

To receive our listings as they appear, click on the heart in the Favorite Shop box.

To view our complete listings, go to:

I'll do my best to meet these shipping estimates, but can't guarantee them. Actual delivery time will depend on the shipping method you choose.

But please contact me if you have any problems with your order.

We specialize in custom orders for resellers all over the world. Contact us to discuss the details.

We no longer sell to China or the Middle East. Although the people are lovely, we have had too many delivery problems.

We ship via Priority Mail within the continental US without any extra charge. For other areas, the order is sent via First Class International Mail with the US Post Office.

There appears to be some confusion about VAT taxes for EU buyers. VAT taxes are NOT included in the selling price - no matter what wording appears in the cart at checkout.

Of course, we are happy to work with large orders. Contact us through messages and explain your needs.

Do not wash any of the china in the dishwasher.

We do not know the exact materials used in the china. We are selling them as decorative items.

0 items in your cart